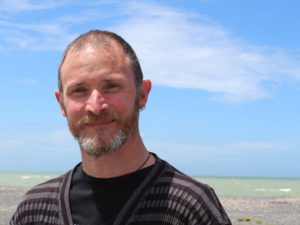 Philip Brownlee (b. 1971) is a composer and sound artist, based in Wellington, New Zealand. In 2008 he received the degree of PhD in Composition from Victoria University of Wellington. This was based on research into the structural role of timbre, through his own compositional practice with instrumental and electroacoustic resources. Between 1999 and 2003 he was a member of Amalgam, a collective which presented a series of cross-disciplinary performance pieces in Wellington. These performances incorporated predetermined musical materials with free improvisation, and elements of theatre, dance and video art. Their 2000 production Meatworks was voted Best Music Show in that year’s Wellington Fringe Festival.

As a composer of concert music, he has worked with many of New Zealand’s leading contemporary music performers, including Stroma, 175 East, Bridget Douglas, Richard Nunns, Robert Ibell, Johnny Chang, and Dylan Lardelli. His works have also been performed at a number of international festivals. Recent works include As if to catch the fleeting tail of time, written in collaboration with the guitarist Dylan Lardelli, for solo guitar and ensemble, which was premiered in Wellington in August 2009. In October 2009 he attended the World Music Days festival at the Central Conservatory of Music in Beijing, as part of a delegation of Māori and Pacific musicians and scholars. In that festival he presented He rimu pae noa, a work for taonga pūoro and ensemble, with Richard Nunns and Horomona Horo, and an ensemble of the Conservatory’s students.